The Color of Abolition: How a Printer, a Prophet, and a Contessa Moved a Nation (Paperback) 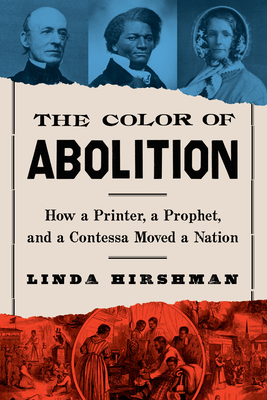 The Color of Abolition: How a Printer, a Prophet, and a Contessa Moved a Nation (Paperback)

The story of the fascinating, fraught alliance among Frederick Douglass, William Lloyd Garrison, and Maria Weston Chapman—and how its breakup led to the success of America’s most important social movement.

In the crucial early years of the Abolition movement, the Boston branch of the cause seized upon the star power of the eloquent ex-slave Frederick Douglass to make its case for slaves’ freedom. Journalist William Lloyd Garrison promoted emancipation while Garrison loyalist Maria Weston Chapman, known as “the Contessa,” raised money and managed Douglass’s speaking tour from her Boston townhouse.

Conventional histories have seen Douglass’s departure for the New York wing of the Abolition party as a result of a rift between Douglass and Garrison. But, as acclaimed historian Linda Hirshman reveals, this completely misses the woman in power. Weston Chapman wrote cutting letters to Douglass, doubting his loyalty; the Bostonian abolitionists were shot through with racist prejudice, even aiming the N-word at Douglass among themselves. Through incisive, original analysis, Hirshman convinces that the inevitable breakup was in fact a successful failure. Eventually, as the most sought-after Black activist in America, Douglass was able to dangle the prize of his endorsement over the Republican Party’s candidate for president, Abraham Lincoln. Two years later the abolition of slavery—if not the abolition of racism—became immutable law.

LINDA HIRSHMAN is the author of Reckoning: The Epic Battle Against Sexual Abuse and Harassment, and of the New York Times best-selling Sisters in Law: How Sandra Day O’Connor and Ruth Bader Ginsburg Went to the Supreme Court and Changed the World.

"Hirshman’s book is a lively depiction of the antislavery movement, in which the three charismatic characters at the heart of her story provide an engaging avenue into the competing philosophies and strategies that continually challenged abolitionism’s unity and effectiveness. Her writing is breezy, designed to engage readers who are not historians and whose interests may lie more in the present than the past." — Washington Post

“Linda Hirshman has two goals. One is to tell the story of the American antislavery movement. This broad narrative provides background for the author’s other focus, a group portrait of three deeply intertwined abolitionists [and reflects] the author’s interest in the current ‘lively and painful conversation about the possibility and conditions of an interracial alliance.’”
— Wall Street Journal

“Page-turning reading . . . . a wonderful cataloging of Americans, white and Black, who devoted their lives to ending slavery.” — Boston Globe

“By lucidly untangling the abolitionist movement’s complex web of alliances, Hirshman sheds light on the antebellum period and the dynamics of social movements in general. American history buffs will be engrossed.” — Publishers Weekly

“Hirshman brings much-needed attention to the little-known triangulation between Garrison, Douglass, and Chapman, opening a new realm of inquiry for readers of the history of slavery and abolition.” — Library Journal

“Linda Hirshman adroitly shows us that in the celebrated break up between Douglass and Garrison, a pivotal actor was Maria Weston Chapman. A brilliant but intrusive soul, Chapman stood watch over both men from a manager's desk in Boston. Beyond intrigue, though, this book provides a splendid lens into the nature of both the moral and political wings of abolitionism at their turbulent turning point. The ideologies of antislavery emerge here from vivid portraits of these three fascinating and rivalrous characters.”  — David W. Blight, Yale University, and author of the Pulitzer Prize-winning Frederick Douglass: Prophet of Freedom

"A rousing account of America’s one truly great crusade, studded with fascinating characters playing for the highest of stakes: freedom.”

“Viewing the abolitionist movement from a unique angle, Hirshman shows how the breakdown of the alliance among [activists Frederick Douglass, William Llloyd Garrison, and Maria Weston Chapman] was fueled in part by Douglass’ rising fame, burgeoning dissent among the nation’s political parties, and, not least, Weston Chapman’s aspersions about Douglass’ work ethic and character. A well-researched history of the fraught path to emancipation.” — Kirkus Reviews