Lessons from the Edge: A Memoir (Paperback) 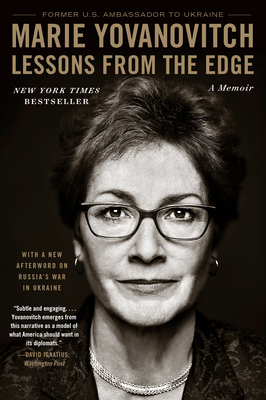 Lessons from the Edge: A Memoir (Paperback)

INSTANT NEW YORK TIMES BESTSELLER | An inspiring and urgent memoir by the former U.S. ambassador to Ukraine—a pioneering diplomat who spent her career advancing democracy in the post-Soviet world, and who electrified the nation by speaking truth to power during the first impeachment of President Trump.

Marie Yovanovitch was at the height of her diplomatic career when it all came crashing down. In the middle of her third ambassadorship—a rarity in the world of diplomacy—she was targeted by a smear campaign and abruptly recalled from her post in Kyiv, Ukraine. In the months that followed, she endured personal tragedy while simultaneously being pulled into the blinding lights of the first impeachment inquiry of Donald Trump. It was a time of chaos and pain, for her and for the nation.

Yet Yovanovitch was no stranger to instability and injustice. Born into a family that had survived Soviet and Nazi terror, she first saw the corrosive effect of corruption in Somalia while cutting her teeth as a diplomat in the male-dominated world of the 1980s State Department. She was an eyewitness to the 1993 constitutional crisis in Russia and the street fighting in Moscow. And she rose to the top of her profession in the crucible of the former USSR, where she saw how President Vladimir Putin adeptly exploited corrupt leaders in neighboring countries and undermined their developing democracies.

Nowhere was Putin’s aggression clearer than in Ukraine, where Russia meddled in elections, launched cyberattacks, peddled misinformation, illegally annexed Crimea, invaded the Donbas, and attacked Ukrainian ships in the Black Sea. But when Yovanovitch was abruptly recalled from her post and Ukraine’s democratically elected president, Volodymyr Zelenskyy, found himself set upon by Trump, it became clear just how dangerously close to the edge America itself had strayed.

Through it all, Yovanovitch tirelessly advocated for the Ukrainian people, while advancing U.S. interests and staying true to herself. When she made the courageous decision to participate in the impeachment inquiry—over the objections of the Trump administration—she earned the nation’s respect, and her dignified response to the president’s attacks won our hearts. She has reclaimed her own narrative, first with her lauded congressional testimony, and now with this powerful memoir: the dramatic saga of one woman’s role at the vanguard of American foreign policy during a time of upheaval, for herself and for our country.

“A brilliant, engaging, and inspiring memoir from one of America’s wisest and most courageous diplomats—essential reading for current policymakers, aspiring public servants, and anyone who cares about America’s role in the world.”—Madeleine K. Albright

“First through the breach, Ambassador Yovanovitch showed Americans what courage and patriotism looks like. More than essential reading, Lessons from the Edge is thoroughly engaging and impossible to put down, showing us how an introverted career diplomat overcame the most vicious of smear campaigns to become a foreign service legend.”—Congressman Adam Schiff

“At turns moving and gripping and always inspiring … a powerful testament to a uniquely American life well-lived and a remarkable career of dedicated public service at the highest levels of government.”—Fiona Hill, New York Times best-selling author of There Is Nothing for You Here: Finding Opportunity in the Twenty-First Century

MARIE YOVANOVITCH served as the US Ambassador to Ukraine, Armenia, and Kyrgyzstan, in addition to other senior government positions during her thirty-three-year diplomatic career. She retired from the State Department in 2020 and is a senior fellow at the Carnegie Endowment for International Peace and a non-resident fellow at Georgetown University. She has received multiple awards, including the Presidential Distinguished Service Award (twice), the Secretary’s Diplomacy for Freedom Award, the Trainor Award for Excellence in the Conduct of Diplomacy, and the PEN/Benenson Courage Award. She lives in the Washington, DC, area.

“Absorbing… During the [impeachment] hearings, Yovanovitch sounded calm and self-assured, but in her book she describes how scared she was…. That I arrived at this moment in the book with my heart in my throat speaks to how skillfully Yovanovitch narrates her life story." — Jennifer Szalai, New York Times

"Subtle and engaging ... Yovanovitch emerges from this narrative as a model of what America should want in its diplomats: courageous, steadfast, removed from politics to the point of naivete." — David Ignatius, The Washington Post

"Lessons From the Edge is a brilliant, engaging, and inspiring memoir from one of America’s wisest and most courageous diplomats. More than just a vivid exposition of the events leading up to Donald Trump’s first impeachment, Ambassador Marie Yovanovitch has written a timely and authoritative account of U.S. policy towards the former Soviet Union. This book is essential reading for current policymakers, aspiring diplomats, and anyone who cares about America’s role in the world.” — Madeleine K. Albright, former US Secretary of State

“A front row seat to the disinformation campaign that ultimately saw [Yovanovitch] removed from her last overseas post… [Lessons From the Edge] also provides insight into the post-Soviet Union politics of Russia and Ukraine… And it pays homage to Foreign Service Officers (FSOs) and the work they do, and a career that still remains a mystery to many Americans.” — NPR.org

“A superbly crafted and intimately revealing self-portrait of a true hero of American diplomacy.… Wherever her diplomatic missions took her, Yovanovitch epitomized foreign service office philosophy, hewing to the principle of representing American ideals and policies with dignity and integrity.” — Booklist (starred review)

“Yovanovitch's memoir is the right book at the right time as readers try to make sense of what's happening in Ukraine.” — USA Today

“Ambassador Yovanovitch’s dismissal from post in Kyiv marked a cruel end to the illustrious career of one of the most respected diplomats in the U.S. Foreign Service. It also helped spark a chain of events that led to Donald Trump’s first impeachment. This memoir, at turns moving and gripping and always inspiring, is a powerful testament to a uniquely American life well-lived and a remarkable career of dedicated public service at the highest levels of government.” — Fiona Hill, Senior Fellow, the Brookings Institution, and New York Times best-selling author of There Is Nothing for You Here: Finding Opportunity in the Twenty-First Century

“Timely and telling, as well as a fine story of a life in national service.” — The Guardian

“First through the breach, Ambassador Yovanovitch showed Americans what courage and patriotism looks like. More than essential reading, Lessons from the Edge is thoroughly engaging and impossible to put down, showing us how an introverted career diplomat overcame the most vicious of smear campaigns to become a foreign service legend.” — Congressman Adam Schiff

“Written with the humility of a true public servant and a novelist’s eye for detail, Ambassador Yovanovitch’s memoir takes readers inside the fast-paced world of modern diplomacy and lays bare the rot and corruption of the Trump administration. Lessons From the Edge offers a sobering account of the abuse of power at the highest levels of our government, but also provides inspiring insights into how public servants with a commitment to justice and democracy can safeguard and help preserve our system.”
— William S. Cohen, former US Secretary of Defense

“When Senator McCain and I visited Ambassador Marie Yovanovitch in Ukraine in 2016, I saw up close her steadfast dedication to our country. And over the next four years, the world saw that her commitment to combating corruption and defending democracy knew no borders. Her memoir is a testament both to the importance of diplomacy and her own strength of character—even in the most trying of circumstances.”
— Senator Amy Klobuchar

“Diplomats are the military’s indispensable partners—the protectors of the protectors. In this riveting, fast-paced account of her thirty-three years in the U.S. Foreign Service, Marie Yovanovitch reveals how our diplomats serve as the front line of our national security. She convincingly argues that active U.S. engagement overseas makes for a better world and a more secure America, and she sounds the alarm about the threats we face from an increasingly emboldened Russia. Lessons from the Edge is a must-read for anyone interested in understanding how best to advance U.S. interests abroad.”
— General John Abizaid (US Army, Ret.), former commander of US Central Command, and former senior defense adviser to Ukraine

“Marie Yovanovitch is famous for her integrity and honesty at the impeachment hearings recounted here, but this book is much more. It is also a story of how the daughter of immigrants overcame gender discrimination to become an American ambassador. It is an engaging tale.”  — Joseph S. Nye, professor, Harvard University, and author of Do Morals Matter?: Presidents and Foreign Policy from FDR to Trump

“A gripping account … Full of shrewd insights and bitter ironies, Yovanovitch’s saga offers a revealing insider’s take on the labyrinth of foreign policy and on one of the most sordid episodes of Trump’s presidency.” — Publishers Weekly