Coach K: The Rise and Reign of Mike Krzyzewski (Paperback) 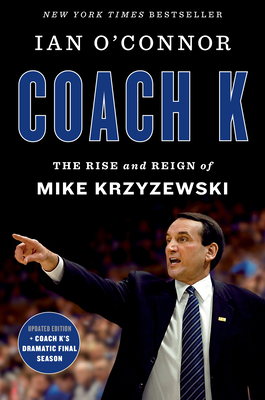 Coach K: The Rise and Reign of Mike Krzyzewski (Paperback)

Mike Krzyzewski, known worldwide as “Coach K,” is a five-time national champion at Duke, the NCAA’s all-time leader in victories with nearly 1,200, and the first man to lead Team USA to three Olympic basketball gold medals. Through unprecedented access to Krzyzewski’s best friends, closest advisers, fiercest adversaries, and generations of his players and assistants, three-time New York Times bestselling author Ian O’Connor takes you behind the Blue Devil curtain with a penetrating examination of the great but flawed leader as he closes out his iconic career.

Krzyzewski built a staggering basketball empire that has endured for more than four decades, placing him among the all-time titans of American sport, and yet there has never been a defining portrait of the coach and his program. Until now. O’Connor uses scores of interviews with those who know Krzyzewski best to deliver previously untold stories about the relationships that define the venerable Coach K, including the one with his volcanic mentor, Bob Knight, that died a premature death. Krzyzewski was always driven by an inner rage fueled by his tough Chicago upbringing, and by the blue-collar Polish-American parents who raised him to fight for a better life.  With updated coverage of Coach K’s stunning final season, O’Connor shows you sides of the man and his methods that will surprise even the most dedicated Duke fan.

“Basketball fans might feel as though they already know Coach K—or Mike Krzyzewski, the decades-long coach of the Duke Blue Devils who’s set to retire after this season. In this insightful biography, sportswriter O’Connor captures the formative experiences and inner drive that catapulted the coach to icon status. Even the most die-hard fans will learn something.” — Washington Post

Ian O’Connor is an award-winning columnist who has written four previous books including The New York Times bestsellers Belichick, The Captain, and Arnie & Jack. He has finished in first place in 18 national writing contests, including those conducted by the Pro Football Writers of America, Golf Writers Association of America, and Associated Press Sports Editors. He is a sports columnist at The New York Post, and former columnist for ESPN.com, USA Today, and The New York Daily News. Twitter: @Ian_OConnor

“The reporting and research are exhaustive and impressive. The writing is direct. The portrayal is fair, but unsparing. In many ways, Ian O'Connor's work is like Mike Krzyzewski himself: unrelenting, contemplative, purposeful. You not only learn about the coach and the man in this book, but more important, you understand him. No small feat.”  — Gene Wojciechowski, ESPN’s College GameDay reporter and New York Times bestselling author of The Last Great Game

"Basketball fans might feel as though they already know Coach K—or Mike Krzyzewski, the decades-long coach of the Duke Blue Devils who’s set to retire after this season. In this insightful biography, sportswriter O’Connor captures the formative experiences and inner drive that catapulted the coach to icon status. Even the most die-hard fans will learn something." — Washington Post

"New York Post sports columnist O’Connor (Belichick) delivers a standout definitive biography of Mike Krzyzewski, who led the Duke Blue Devils to five NCAA titles during his decades-long tenure as coach.... The coach’s preternatural ability to 'motivate people to achieve things they did not believe they were capable of achieving' is inspiring, as is the arc that O’Connor paints of his life as 'a low-income street kid' who became 'the greatest college basketball coach of all time.' Fans won’t want to miss this insightful look at a colossal figure in college sports." — Publishers Weekly

"O'Connor is a masterful biographer...No one does it better...An excellent biography of a fascinating basketball coach and highly recommended for any college basketball fan." — All Sports Book Reviews

"I think Ian is one of the best writers in the country...and look at it as an honor that somebody of that level would write a book on me." — Mike Krzyzewski, Duke men's basketball coach

"The best account of a most pugnacious presence. ...a brilliant expose for anyone with interest in the combative melting pot of college athletics, sports management, and the type of character that succeeds within it." — Refereads

“From one of the preeminent sports biographers in this country…another piece of remarkable work” — Adrian Wojnarowski, The Woj Pod

"It is absolutely fantastic. [The] level of reporting is insane. …This book is so fun, it really is. When you bring in the Bob Knight stuff, it is jet fuel to this book. You can’t get enough of this….An absolute must read.” — Colin Cowherd, The Herd Host and New York Times Bestselling Author

"A fascinating portrait of sporting greatness... There is a staggering amount of reportage at work here. ...(O'Connor's) reporting bona fides permeate the book, with a clear, concise authorial voice that informs and entertains without the passing of judgment -- an uncommon feat in a biography, particularly a sports biography.... An outstanding work." — Allen Adams, themainedge.com

“Coach K will draw you in on Page 1 and not let you go till you get to the index. You can bank on that.” — Mike Vaccaro, New York Post

"Just as there are all-time great coaches who go down as masters of the sideline, there are all-time great biographers who go down as masters of the written word. Ian O'Connor's Coach K is a breathtaking deep dive into a modern-day basketball legend, delivered with dogged reporting and eye-opening insights. Though Mike Krzyzewski is done with his whistle and clipboard, O'Connor makes certain his aura will forever loom."  — Jeff Pearlman, six-time New York Times bestselling author of Showtime

“No journalist alive is better than Ian O’Connor at pulling back the curtain on the inner workings of the great unknowable sports figure, and he’s done it again with Coach K. This boldly revealing biography provides a perfect punctuation mark to the career of arguably the greatest basketball coach in American history. As usual, O’Connor is the first to journey inside the closely guarded life of this legendarily stoic leader. And, as usual, the result is an enduring masterpiece.” — Bill Plaschke, Los Angeles Times sports columnist and ESPN’s Around the Horn panelist