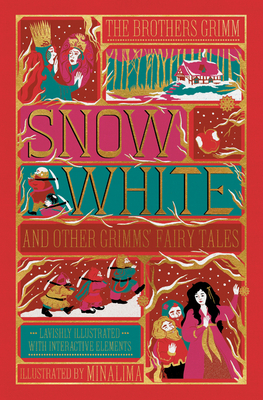 By Jacob and Wilhelm Grimm

Snow White and Other Grimms’ Fairy Tales includes twenty-three of the most popular tales penned by German brothers Jacob and Wilhelm Grimm, taken from their original collection Children’s and Household Tales, first published in 1812.

Here are beloved characters, including Snowdrop (Snow White), Briar Rose (Sleeping Beauty), Ashputtel (Cinderella), Rapunzel, Hansel and Gretel, Rumpelstiltskin, The Elves and The Shoemaker, all reimagined by the brilliant award-winning designers at MinaLima. This deluxe edition is illustrated with specially commissioned artwork and includes nine extraordinary interactive features ranging from a pop-up forest and pull-tab mirror for Snow White and a wall of thorns encasing Sleeping Beauty to a three-dimensional ball gown for Cinderella and a pop-up tower for Rapunzel.

Filled with marvels, this beautiful edition will enchant readers of every age and is sure to become a treasured keepsake.

Jacob and Wilhelm Grimm were academics best known for publishing anthologies of folk and fairy tales. Their first collection, Children’s and Household Tales, was published in 1812. They popularized numerous now-classic stories, including Snow White, Little Red Riding Hood, and Rumpelstiltskin, among many others.