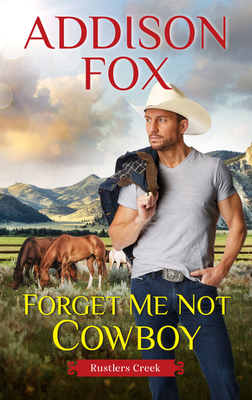 This is book number 2 in the Rustlers Creek series.

Addison Fox welcomes you back to Rustlers Creek, where a handsome ranch vet’s long-ago love has finally returned, but soon he won’t remember all the years apart… or why he’s never been able to forget her.

Harper Allen has returned to Rustlers Creek but she’s not the heartbroken girl who left. After a successful career in Seattle, she’s back in her hometown to launch her coffee business with the help of her celebrity sister, the Cowgirl Gourmet. But Harper can’t escape handsome veterinarian Gray McClain, the man who broke her heart ten years ago and whose kisses still make her head spin.

Although Gray believed he knew what he was doing when he ended things with Harper, seeing her has made him question everything. He wanted more for her than a life with the son of a town drunk, but every moment with her is heaven. When a freak ranch accident causes Gray to lose some of his memory, he believes he’s spent the last decade with Harper, the woman he’s never stopped loving, instead of alone.

As Harper helps Gray return to health, she can’t deny she’s more in love with him than ever. But can she fight for the man of her dreams, even when he’s determined to let her go again? When it comes to choosing to forget or choosing to remember, Harper must show Gray she’ll always remember her cowboy.

Addison Fox is a lifelong romance reader, always in search of her next happy-ever-after. Once she discovered she found as much joy writing about romance as she did reading it, she never looked back. Addison lives in New York with an apartment full of books, a laptop rarely out of reach, and a wily beagle who keeps her running. You can reach her at addisonfox.com where she always loves to hear from readers.