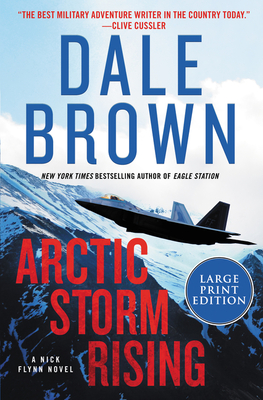 This is book number 1 in the Nick Flynn series.

After a CIA covert mission goes badly awry, U.S. Air Force intelligence officer Nicholas Flynn is exiled to guard a remote radar post along Alaska’s Arctic frontier. This dead-end assignment is designed to put his career permanently on ice, but Flynn’s not the type to fade quietly into obscurity...

As winter storms pound Alaska and northern Canada, Russian aircraft begin penetrating deep into friendly airspace. Are these rehearsals for a possible first strike, using Russia’s new long-range stealth cruise missiles? Or is some other motive driving the Kremlin to take ever-increasing risks along the hostile Arctic frontier separating two of the world’s great powers?

When an American F-22 collides with one of the Russian interlopers, things go south fast—in seconds, missiles are fired. There are no survivors. Despite horrific weather, Flynn and his security team are ordered to parachute into the area in a desperate bid to reach the crash sites ahead of the Russians. It’s now obvious that the Pentagon and CIA are withholding vital information, but Flynn and his men have no choice but to make the dangerous jump.

Soon they’re caught in a deadly game of hide-and-seek with Spetsnaz commandos operating covertly on American soil. It seems that the F-22s and their Russian counterparts aren’t the first aircraft to have gone missing in these desolate mountains. The Kremlin is hunting for the first prototype of its new stealth bomber—which vanished on what was supposed to be a test flight…while loaded with nuclear-armed stealth cruise missiles.

As Russia and the U.S. square off on the brink of all-out-war, it’s up to Nick to find the missing bomber…and prevent a potential nuclear holocaust.

Dale Brown is the New York Times bestselling author of numerous books, from Flight of the Old Dog (1987) to, most recently, Eagle Station (2020). A former U.S. Air Force captain, he can often be found flying his own plane in the skies of the United States. He lives near Lake Tahoe, Nevada.

“Nick Flynn, an air force captain… tries to meld his band of misfits into a working unit at the Alaska outpost… to prevent a nuclear war. Filled with detailed descriptions of weapons and aircraft, as well as Brown’s trademark action and suspense, this series starter should take off.” — Library Journal

“A new series from the master of military action thrillers … Dale Brown is off and soaring once again, in the setting the title calls out, with intrigue almost as much as action.” — Sullivan Co. Democrat

“The plot layers—and betrayals—that follow are reminiscent of a Russian Matryoshka doll … I look forward to his next exploits.” — Bookloon.com

“[Dale Brown] is at the top of his game with Arctic Storm Rising, the first in his awesome new series. Nick Flynn is a great character who operates in accordance with his own code of ethics and sense of humor….Definitely a page turner with lots of fast-paced action and tons of suspense.” — Fresh Fiction

"Dale Brown delivers yet another captivating tale… He takes the time to set the stage and develop the characters before sprinting for the finish line with astonishingly intense action sequences… Guaranteed to be enjoyed by… fans of military thrillers by authors such as Brad Taylor, Ben Coes and Ward Larsen." — Best Thriller Books

“Plenty of action-filled flying time described in the type of detail that will thrill most space junkies and fans of flight. A well-researched tale of technologically rich thrills.” — Kirkus Reviews on Eagle Station

“Brown’s look at the future of the military and potential conflicts with new technology and warfare continues to be engaging.… Fans who have grown fond of Patrick and his team will love this latest installment.” — Booklist on The Kremlin Strike

“This action-packed techno-thriller is filled with enough complex aerospace and aeronautical jargon to sizzle the senses.... A well-researched and fast-paced story that provides all the requisite sparks to keep the pages turning.” — Kirkus Reviews on The Kremlin Strike

"A very smart, timely, and terrifying political thriller… Current, spot-on, and full of bone-crushing action, Dale Brown’s The Moscow Offensive is one of his best novels to date, and a sure bet to please action junkies who also like heaping sides of politics and next-gen tech.” — The Real Book Spy

“Spectacular… The action builds to an exciting climactic battle... Brown shows once again why he stands out in the crowded military thriller genre.” — Publishers Weekly on The Kremlin Strike