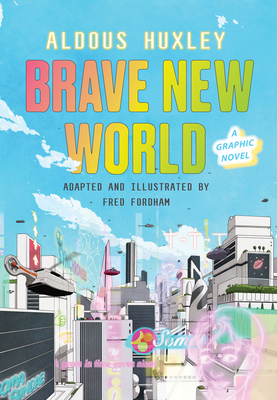 "Brilliant. . . . This rip-roaring graphic retelling of the Aldous Huxley classic brings to mind Fritz Lang, Spielberg and vintage comics. . . . This is a book that will keep your bedside light burning long into the night." — The Guardian

Available for the first time as a graphic novel, “one of the most prophetic dystopian works of the twentieth century” (Wall Street Journal), Aldous Huxley’s revered classic, adapted and illustrated by Fred Fordham, the artist behind the graphic novel adaptation of To Kill A Mockingbird

In Aldous Huxley’s darkly satiric yet chillingly prescient imagining of a “utopian” future, humans are genetically bred, socially indoctrinated, and pharmaceutically anesthetized to passively uphold an authoritarian ruling order—all at the cost of their freedom, full humanity, and perhaps also their souls. Originally published in 1932, Brave New World has enthralled and terrified millions of readers for decades and now it has been reborn for a new age.

In Brave New World: A Graphic Novel Fred Fordham’s aesthetically reimagined adaptation brings Huxley’s powerful work to life. Fordham has captured the surreal imagery and otherworldly backdrop of the story through brilliantly rendered illustrations. His singular artistic vision and impeccable attention to detail depicts the work as never before, introducing it to a new generation of readers in a fresh and compelling way.

Huxley’s enduring classic is a reflection and a warning of the age in which it was written yet remains frighteningly relevant today.

Aldous Huxley (1894–1963) is the author of the classic novels Brave New World, Island, Eyeless in Gaza, and The Genius and the Goddess, as well as such critically acclaimed nonfiction works as The Perennial Philosophy and The Doors of Perception. Born in Surrey, England, and educated at Oxford, he died in Los Angeles, California.

"Brilliant. . . . This rip-roaring graphic retelling of the Aldous Huxley classic brings to mind Fritz Lang, Spielberg and vintage comics. . . . This is a book that will keep your bedside light burning long into the night." — The Guardian

"This smart graphic adaptation is fully in service to Huxley’s story—and what a story it turns out to be, with sex, adventure, violence, love, tragedy, and vibrant characters woven into a philosophical treatise on God and the meaning of life with Shakespeare thrown in for good measure. . . . Fordham puts his own creativity into the designs. . . . Sleekness abounds. . . . It is a masterful treatment.” — The Comics Journal