After Dark with the Duke: The Palace of Rogues (Mass Market) 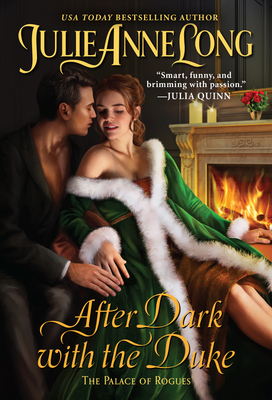 This is book number 4 in the The Palace of Rogues series.

She arrives in the dead of night, a mob out for blood at her heels: Mariana Wylde, the “Harlot of Haywood Street,” an opera diva brought low by a duel fought for her favors. But the ladies of the Grand Palace on the Thames think they can make a silk purse from scandal: They’ll restore her reputation and share in her triumph...provided they can keep her apart from that other guest.

Coldly brilliant, fiercely honorable, General James Duncan Blackmore, the Duke of Valkirk, is revered, feared, desired...but nobody truly knows him. Until a clash with a fiery, vulnerable beauty who stands for everything he scorns lays him bare. It’s too clear the only cure for consuming desire is conquest, but their only chance at happiness could lead to their destruction.

The legendary duke never dreamed love would be his last battleground. Valkirk would lay down his life for Mariana, but his choice is stark: risk losing her forever, or do the one thing he vowed he never would...surrender.

USA Today bestselling author and Rita® Award winner Julie Anne Long’s books have been translated into eighteen languages, nominated for numerous awards, and have appeared on dozens of “Best of” lists. NPR named her Pennyroyal Green series as one of the Top 100 romance series of all time. She currently lives in Northern California.

“Long finds that delectable sweet spot with Angel in a Devil’s Arms, welcoming us all to the cozy warmth of the Grand Palace on the Thames with the peculiar blend of humor and pathos she writes with such aplomb.” — Entertainment Weekly

“Deploying her usual perfectly calibrated mix of irresistibly dry wit and superbly nuanced characterization, RITA Award-winning Long adds another winner to her Palace of Rogues series with this lushly sensual, exquisitely emotional, and gracefully written tale about two people desperately trying not to fall in love with each other.” — Booklist (starred review) for Angel in a Devil’s Arms

“Delightful...refreshing. Readers will enjoy this rich depiction of how the past informs but does not dictate the future.”  — Publishers Weekly for Angel in a Devil’s Arms

“Sparkling banter, deep character insights, and a colorful supporting cast bring a clever scheme to life, setting up a series to savor. Historical readers will rejoice with Long’s return to the subgenre and will be intrigued by hints of the next ‘Rogues’ title.” — Library Journal (starred review, editor’s pick), on Lady Derring Takes a Lover