Bootstrapped: Liberating Ourselves from the American Dream (Hardcover) 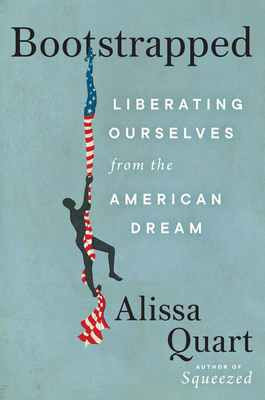 Bootstrapped: Liberating Ourselves from the American Dream (Hardcover)

An unsparing, incisive, yet ultimately hopeful look at how we can shed an American obsession with self-reliance that has made us less equal, less healthy, less productive, and less fulfilled

The promise that you can “pull yourself up by your bootstraps” is central to the story of the American dream. It’s the belief that if you work hard and rely on your own resources, you will ultimately succeed. However, time and again we have seen the way this foundational myth, with its emphasis on individual determination, brittle self-sufficiency, and personal accomplishment, does not help us. Instead, as income inequality rises around us, we are left with shame and self-blame for our condition.

Acclaimed journalist Alissa Quart argues that at the root of our suffering is the misplaced belief in our own independence and the conviction that we must rely on ourselves alone, a do-it-yourself ethos. Looking at a range of delusions and half solutions—from “grit” to the deceptions of hyper-capitalist philanthropy, from the false Horatio Alger story to the rise of GoFundMe—Quart reveals how we were steered away from robust social programs that would address the root causes of our problems. Meanwhile, the responsibility for survival has been shifted onto the backs of ordinary people, burdening generations with debt instead of providing free higher education or universal health care.

Insightful, sharply argued, and characterized by Quart’s lively writing and deep reporting, and for readers of Evicted and Nickel and Dimed, Bootstrapped is a powerful examination of what ails us at a societal level—the corruption at the foundations of our American experiment—and how we can free ourselves of these self-defeating narratives.

Alissa Quart is the author of four previous books of nonfiction, including Squeezed and Branded, and two books of poetry. She is the executive director of the Economic Hardship Reporting Project and writes for publications including the Guardian, the Washington Post, and the New York Times. Her honors include an Emmy, a Nieman Fellowship, and Columbia University’s Journalism School Alumna of the Year. She lives with her family in Brooklyn.

“In Bootstrapped, Alissa Quart takes you on a wild journey to the ideological heart of the self-made myth. The reporting and storytelling here are incredible; my jaw literally dropped several times. But even as Quart tears down ‘the bootstraps’ con through compelling portraits of lived realities, she also builds up a demonstration — at once realistic and utopian — of the many ‘arts of interdependence,’ as she calls them, on which we rely. Ultimately, this book left me with much-needed hope, resolve, and curiosity about all the things we make possible together.”  — Jenny Odell, author of How to Do Nothing

“Alissa Quart is a national treasure. Among other things, she's the foremost chronicler of this country’s increasingly downwardly mobile middle class. Bootstrapped is an incisive and alarming reminder that we deserve more than what this country offers. This stirring book exposes what Quart calls the ‘dystopian social safety net,’ showing that the real way to do better is to work together for the common good." — Astra Taylor, co-founder of the Debt Collective and author of Democracy May Not Exist, But We'll Miss It When it's Gone

“Quart shreds the myth that white wealth comes from individualism. She also breaks down how this lie is used to exploit America’s poorest workers, creating unprecedented riches for the few. Clear writing and consequential arguments make Bootstrapped an enlightening and informative page turner.”  — Sarah Schulman, author of Let The Record Show: A Political History of ACT UP, New York 1987-1993

“In this illuminating book, Alissa Quart takes on the most powerful idea in America, exploring the mythology that we become rich through solitary hard work. She also offers more fulfilling community-based ideas that can help us actually achieve a good life. A very important read.”  — Arlie Hochschild, author of Strangers In Their Own Land: Anger and Mourning on the American Right