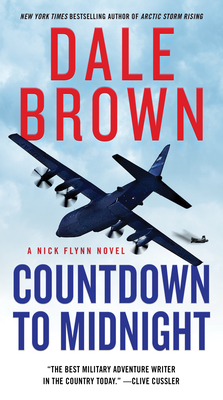 This is book number 2 in the Nick Flynn series.

Nick Flynn is back in action, and he has a new employer—a shadowy intelligence outfit whose roots go back to the very beginning of the Cold War. But his first mission for them almost becomes his last. While meeting with a high-ranking Iranian dissident in the Austrian Alps, Flynn is ambushed and nearly killed… just after learning that Iran and Russia are working together on a mysterious project—one they have codenamed MIDNIGHT.

Flynn is determined to uncover MIDNIGHT’s lethal secrets. Why are Moscow and Tehran covertly retrofitting a massive oil tanker in an Iranian port? What purpose lies behind their closely guarded effort, the brainchild of Pavel Voronin—a ruthless billionaire allied with Russia’s autocratic president?

Flynn and his new team plan to put an end to the nefarious project, but they’re dogged at every step by Voronin’s hired Raven Syndicate killers—elite veterans of Russia’s special forces and intelligence services. As they track the enemy from the streets of Vienna to deep inside hostile Iran, Flynn and his crew must repeatedly risk their lives to pierce the layers of deception around this shadow war.

It’s a race against time to stop Voronin from launching his terrifying new weapon against the United States—potentially killing hundreds of millions and overturning the world’s balance of power forever. The odds are stacked high against Flynn and his team… but that’s never stopped Nick before.

Dale Brown is the New York Times bestselling author of numerous books, from Flight of the Old Dog (1987) to, most recently, Eagle Station (2020). A former U.S. Air Force captain, he can often be found flying his own plane in the skies of the United States. He lives near Lake Tahoe, Nevada.

“Nick Flynn, an air force captain… tries to meld his band of misfits into a working unit at the Alaska outpost… to prevent a nuclear war. Filled with detailed descriptions of weapons and aircraft, as well as Brown’s trademark action and suspense, this series starter should take off.” — Library Journal on Arctic Storm Rising

“A new series from the master of military action thrillers … Dale Brown is off and soaring once again, in the setting the title calls out, with intrigue almost as much as action.” — Sullivan Co. Democrat on Arctic Storm Rising

“Dale Brown strikes again with an energetic and adventurous thriller… Countdown to Midnight is high octane entertainment concocted with a tasty recipe for big-screen action extravaganza and enthralling storytelling that brings a fresh change to a familiar concept.” — Kashif Hussain, BestThrillerBooks.com

"Countdown to Midnight is an audacious blend of tradecraft, tactics, and thermonuclear warfare... A throwback to the golden age of Bond movies. Solid storylines, clever espionage encounters, and an entertaining level of combat makes this a fun read for any thriller fan." — Todd Wilkins, BestThrillerBooks.com

“[Dale Brown] is at the top of his game with Arctic Storm Rising, the first in his awesome new series. Nick Flynn is a great character who operates in accordance with his own code of ethics and sense of humor….Definitely a page turner with lots of fast-paced action and tons of suspense.” — Fresh Fiction

"Dale Brown delivers yet another captivating tale… He takes the time to set the stage and develop the characters before sprinting for the finish line with astonishingly intense action sequences… Guaranteed to be enjoyed by… fans of military thrillers by authors such as Brad Taylor, Ben Coes and Ward Larsen." — Best Thriller Book on Arctic Storm Rising

“Plenty of action-filled flying time described in the type of detail that will thrill most space junkies and fans of flight. A well-researched tale of technologically rich thrills.” — Kirkus Reviews on Eagle Station

“Brown’s look at the future of the military and potential conflicts with new technology and warfare continues to be engaging.… Fans who have grown fond of Patrick and his team will love this latest installment.” — Booklist on The Kremlin Strike