Breathe: A Life in Flow (Hardcover) 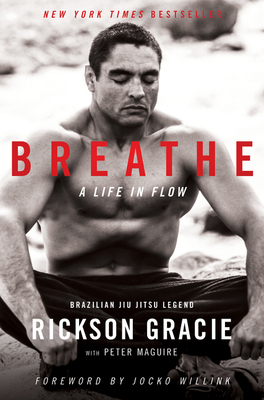 From legendary Brazilian Jiu-Jitsu and MMA master Rickson Gracie comes a riveting, insightful memoir that weaves together the story of Gracie’s stunning career with the larger history of the Gracie family dynasty and the founding of the Ultimate Fighting Championship, showing how the connection between mind and body can be harnessed for success both inside and outside the ring.

Undefeated from the late 1970s through his final fight in the Tokyo Dome in 2000, Rickson Gracie amassed hundreds of victories in the street, on the mat, at the beach, and in the ring. He has joined the pantheon that includes Bruce Lee, Chuck Norris, and Jackie Chan as one of the most famous martial artists of the twentieth century. Jiu-Jitsu, the fighting style developed and pioneered by his family, has become one of the world’s most prominent martial arts, and Vale Tudo, the “anything goes” style of Brazilian street fighting over which the Gracies had a monopoly, was an early precursor to the Ultimate Fighting Championship. Simply put, without the Gracie family, there would be no sport of “MMA,” no 4-billion-dollar UFC empire, and no “Brazilian Jiu-Jitsu” at strip malls all across America.

In Breathe, for the first time, Rickson reveals the full story of how his father and uncles came to develop Jiu-Jitsu, what it was like to grow up among several generations of world-renowned fighters from the Gracie clan, and the principles and skills that guided him to his undefeated record. From learning to assert himself on the streets of Rio to gaining fame and honor in Japan and emerging through heartbreaking tragedy, the martial arts master shares tales of overcoming challenges, extolling universal virtues and showing readers how pride and ego are the enemies of success.

With never-before-seen photos and profound insights into the sport and way of life that only a studied legend can provide, Breathe is an entertaining and magnified view of an enduring legacy as well as an inspiring tale of weathering life’s complexities and overcoming them with style and grace.

Rickson Gracie, member of the most prominent martial arts family, was born in Rio de Janeiro, Brazil, where he entered his first Jiu Jitsu competition at the age of six. By the age of fifteen he was teaching his family’s martial art. For almost two decades, Gracie reigned as world Jiu Jitsu champion in both the middle heavy weight and open divisions. He retired from fighting with an undefeated record.

Since retiring, he has focused on unifying and spreading his family martial art through his Global Jiu Jitsu Federation. Today, he teaches seminars around the world and his students come from all walks of life: men, women, children, senior citizens, law enforcement officers, military personnel, veterans suffering from PTSD, and martial artists of all styles. A film about his life, Dead or Alive, directed by Narcos director José Padilha, is currently in production from Netflix.

Peter Maguire is the author of Law and War, Facing Death in Cambodia, and Thai Stick, which he is presently developing into a feature film for Netflix. Maguire has taught the law and theory of war at Columbia University, Bard College, and University of North Carolina at Wilmington. His book Thai Stick was nominated for American Historical Association’s Gerry Bentley Prize for global history and Columbia Journalism School’s J. Anthony Lucas Prize for excellence in nonfiction. A coauthor of the script for the Rickson Gracie film Dead or Alive, Maguire has been Rickson’s student and friend for over 25 years.

“There is Jiu Jitsu, and then there is Rickson Gracie. All others fit neatly below. The presence of mind and body to make micro adjustments in order to occupy what he calls 'The Middle' and his deep understanding in the form of Connection and Balance sets him apart from other Masters of this so called Gentle Art. Gentle, my ass. You keep what you kill.” — Maynard James Keenan, martial artist, winemaker, and lead singer of Tool and A Perfect Circle

“One of my favorite books on martial arts are Takuan SoHo’s The Unfettered Mind. Takuan was not a sword master—he was a Zen Master who wrote about the sword, in spite of never having fought with one. And yet his writings were revered by Japan’s legendary sword masters, including Miyamoto Musashi. Why? Because Takuan understood that a fluid mindset is required to excel in both combat and life. Rickson Gracie is the embodiment of this mindset. His book Breathe tells the story of his life, a journey that taught him how deal with pressure with an unfettered mind. I don’t know of any athlete, in any sport, who can perform in 'the zone' or 'the flow,' the way that Rickson Gracie did.”   — José Padilha, director of Bus 174, The Elite Squad, Robocop, Narcos, and Entebbe

“Rickson Gracie and me had a match in the BYU wrestling room in 1992. He made me tap out twice and told me I was the toughest guy he’d gone against. Rickson was the best fighter I’d ever seen. He still may be.” — Mark Schultz, wrestler and Olympic gold medalist

“His approach to martial arts, to the game of unarmed combat is well beyond his years. He is definitely an inspiration of mine.” — Conor McGregor, UFC double-champion

“Rickson’s one of my heroes. Maybe the most dominant athlete in any sport of all time, and he’s hugely inspired me. Without knowing it, he helped me a lot.” — Kelly Slater, 11-time World Surfing League champion

"Breathe: A Life in Flow is at its best when it tells beautiful, small little stories illustrating this truth about how Gracie moves through the world, as a fighter, a surfer, and a man doing his best to be his best." — Carolyn Lee Adams, Bloody Elbow