Spooked: The Trump Dossier, Black Cube, and the Rise of Private Spies (Hardcover) 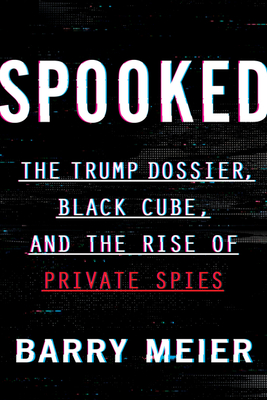 Spooked: The Trump Dossier, Black Cube, and the Rise of Private Spies (Hardcover)

A Pulitzer Prize winning investigative journalist’s journey into a billon-dollar secret industry that is shaping our world – the booming business of private spying, operatives-for-hire retained by companies, political parties  and the powerful to dig up dirt on their enemies and, if need be, destroy them.

For decades, private eyes from Allan Pinkerton, who formed the first detective agency in the U.S., to Jules Kroll, who transformed the investigations business by giving it a corporate veneer, private spies were content to stand in the shadows. Now, that is all changing. High-profile stories grabbing recent headlines – the Steele Dossier, Black Cube, the Theranos scandal, Harvey Weinstein’s attacks on his accusers –  all share a common thread, the involvement of private spies.

Today, operatives-for-hire are influencing presidential elections, the news media, government policies and the fortunes of companies.. They are also peering into our personal lives as never before, using off-the shelf technology to listen to our phone calls, monitor our emails, and decide what we see on social media. Private spying has never been cheaper and the business has never been more lucrative—just as its power has never been more pervasive.


Spooked is a fast-paced, disturbing and, at times, hilarious tour through the shadowlands of private spying and its inhabitants, a grab-bag collection of ex-intelligence operatives, former journalists and lost souls. In this hidden world, information is currency, double-crosses are commonplace, and hacking can be standard procedure.  Drawing on his journalistic expertise and unique access to sources, Barry Meier uncovers the secrets private spies want to keep hidden.

Barry Meier is a former New York Times reporter and a member of the Times’ team that won the 2017 Pulitzer Prize for International Reporting. He is also a two-time winner of the prestigious George Polk Award for Investigative Reporting and other professional honors. Prior to joining the Times in 1989, he worked for the Wall Street Journal and New York Newsday. He is also the author of Pain Killer and Missing Man. Meier lives in New York City.

“Spooked is a . . . fascinating account of just how far the modern surveillance state has leeched in the private sector—and into private lives.” — Jonny Diamond, Literary Hub Editor-in-Chief

“A truly alarming glimpse into how the information market has become turbo-charged by dark money, loose morals and oligarchic feuds. I would highly recommend reading it.” — Oliver Bullough, author of Moneyland

“[Meier] has said what hardly anyone else in his circle of elite mainstream journalists has had the courage to say.” — Wall Street Journal

“Shines a light on the recent newsmakers in private espionage.” — New York Post

“Spooked reads like the best kind of spy story: a gripping tale packed with twists and turns, uncovering a secret side of our modern world.” — Waterstones

“Meier is a Pulitzer-winning former New York Times reporter, and he stirs an incredible amount of well-researched material into this book . . . a mad whirl of double-cross, Machiavellian machinations and, of course, money.” — Darragh McManus, Irish Independent

“Pulitzer Prize-winning investigative journalist Barry Meier delves into the pervasive, billion-dollar private spy industry in Spooked. . . . Meier is a lively guide to this dark and dangerous world.” — Tatler (UK), The 10 Best Books to Read in Spring 2021

"An adroitly handled, disturbing exposé, clearly relevant to discussions of the tactics of Trump and company....The labyrinthine narrative reveals a slick, high-stakes dark side to the proliferation of private intelligence firms via such flashpoints as the “Steele dossier” on Donald Trump and the “sleazy tactics” employed by Israeli firm Black Cube on behalf of Harvey Weinstein. Decrying “the oversized impact" of these private spies, the author circles back to a grim secret: 'the big money is made not by exposing the truth but by papering it over or concealing it.'" — Kirkus Reviews

“A lively and readable examination of some of the mischief wrought by the business of private spies.” — New York magazine

“The first mainstream press figure to break the industry omerta over the reporting failures of Russiagate. . . . a particularly entertaining read for anyone who’s ever worked in a newsroom.” — Matt Taibbi

“Spooked: The Trump Dossier, Black Cube, and the Rise of Private Spies contains a comprehensive, page-turning narrative of the massive media and political dumpster fire that was the Steele dossier. . . . It’s a public service to have the rise and fall of the dossier documented so thoroughly in one place by an author who cannot be dismissed. The essentials are all there and then some, advancing the ball with colorful new details. . . . Regardless of your political perspective . . . [this] book is well worth a read.” — Jason Foster, The Federalist