The True Believer: Thoughts on the Nature of Mass Movements (Paperback) 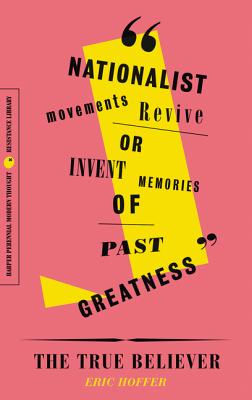 The True Believer: Thoughts on the Nature of Mass Movements (Paperback)

“Its theme is political fanaticism, with which it deals severely and brilliantly.”   —New Yorker

The famous bestseller with “concise insight into what drives the mind of the fanatic and the dynamics of a mass movement” (Wall St. Journal) by the legendary San Francisco longshoreman.

A stevedore on the San Francisco docks in the 1940s, Eric Hoffer wrote philosophical treatises in his spare time while living in the railroad yards. The True Believer—the first and most famous of his books—was made into a bestseller when President Eisenhower cited it during one of the earliest television press conferences.

Called a “brilliant and original inquiry” and “a genuine contribution to our social thought” by Arthur Schlesinger, Jr., this landmark in the field of social psychology is completely relevant and essential for understanding the world today as it delivers a visionary, highly provocative look into the mind of the fanatic and a penetrating study of how an individual becomes one.

In times of crisis, the great works of philosophy help us make sense of the world. This book is part of the Harper Perennial Resistance Library, a special five-book series highlighting short classic works of independent thought that illuminate the nature of truth, humanity's dangerous attraction to authoritarianism, the influence of media and mass communication, and the philosophy of resistance—all critical in understanding today's politically charged world.

Eric Hoffer (1902 -- 1983) was self-educated. He worked in restaurants, as a migrant fieldworker, and as a gold prospector. After Pearl Harbor, he worked as a longshoreman in San Francisco for twenty-five years. The author of more than ten books, including The Passionate State of Mind, The Ordeal of Change, and The Temper of Our Time, Eric Hoffer was awarded the Presidential Medal of Freedom in 1983.

“The True Believer glitters with icy wit. . . bristles with deadly parallels. . . . It is a harsh and potent mental tonic.” — New York Times

“If you want concise insight into what drives the mind of the fanatic and the dynamics of a mass movement at their most primal level, may I suggest an evening with Eric Hoffer.” — John McDonough, Wall St. Journal

“[Hoffer] is a student of extraordinary perception and insight. The range of his reading and research is vast, amazing. He has written one of the most provocative books of our immediate day.” — Christian Science Monitor

“Its theme is political fanaticism, with which it deals severely and brilliantly. . . . It owes its distinction to the fact that Hoffer is a born generalizer, with a mind that inclines to the wry epigram and icy aphorism as naturally as did that of the Duc de La Rochefoucauld.” — New Yorker

“Hoffer has outlined a remarkably clear and suggestive theory about the kind of social change he sums up as ‘mass movements,’ supplied concrete illustrative materials drawn from a wide historical range, and put them together in a brief, readable, and provocative book.” — New York Herald Tribune

“This brilliant and original inquiry into the nature of mass movements is a genuine contribution to our social thought.” — Arthur Schlesinger, Jr.