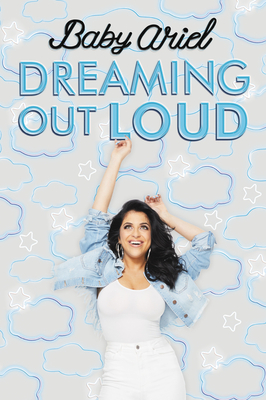 Ariel is all about opening up and being goofy, funny, and completely herself. In her debut book, she talks about every step of her amazing journey: from the good (like being on the cover of Billboard, filming music videos for her original songs, and meeting her amazing fans) to the bad (like overcoming anxiety, handling breakups, and dealing with haters and bullies).

Through it all, Ariel has learned one important lesson that she wants her fans to learn, too: You gotta be you, babies.

Fierce, funny, and real, Dreaming Out Loud goes behind the scenes in the life of one of today’s most popular influencers, giving you Baby Ariel like you’ve never seen her before.

Baby Ariel is a recording artist and social-media phenomenon. She was recently named one of the most influential people on the internet by both Time and Forbes magazines. Ariel got her start creating lip-synching videos in May 2015 on the popular app musical.ly.

Ariel won the 2017 Teen Choice Award for “Choice Muser.” She has been dubbed “The Queen of Gen Z” by Adweek. She has been featured on the cover of Billboard magazine alongside top musical.ly influencer Jacob Sartorius, as well as on 60 Minutes, Good Morning America, CNN, and Rolling Stone. She was nominated for “Breakout Creator” and “Entertainer of the Year” at the 2016 Streamy Awards. The People’s Choice Awards nominated her for “Favorite Social Media Star” in 2017, and the iHeart Radio Music Awards nominated her for its “Social Star Award.” Ariel launched an anti-bullying campaign called #ArielMovement to combat bullying and encourage her followers to stay confident in who they are. People magazine recognized her for her support in the #hackharassment movement to stop internet trolls and negativity on the internet.

“Combines autobiography with self-help. Starting with her rise to celebrity through creating lip-sync videos on the musical.ly app, the Jewish-Latina teen sensation shares her triumphs and struggles.” — Kirkus Reviews