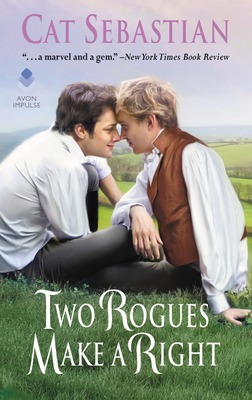 Will Sedgwick can’t believe that after months of searching for his oldest friend, Martin Easterbrook is found hiding in an attic like a gothic nightmare. Intent on nursing Martin back to health, Will kindly kidnaps him and takes him to the countryside to recover, well away from the world.

Martin doesn’t much care where he is or even how he got there. He’s much more concerned that the man he’s loved his entire life is currently waiting on him hand and foot, feeding him soup and making him tea. Martin knows he’s a lost cause, one he doesn’t want Will to waste his life on.

As a lifetime of love transforms into a tender passion both men always desired but neither expected, can they envision a life free from the restrictions of the past, a life with each other?

Cat Sebastian has written sixteen queer historical romances. Cat’s books have received starred reviews from Kirkus, Publishers Weekly, Library Journal, and Booklist. Before writing, Cat was a lawyer and a teacher and did a variety of other jobs she liked much less than she enjoys writing happy endings for queer people. She was born in New Jersey and lived in New York and Arizona before settling down in a swampy part of south. When she isn’t writing, she’s probably reading, having one-sided conversations with her dog, or doing the crossword puzzle.

"Sebastian sends out her Seducing the Sedgwicks series in style with this intimate Regency romance... Sensual sex scenes and fully realized supporting characters enhance the tale, and though the conflict is minimal, Sebastian succeeds in making it feel momentous. This is a delight." — Publishers Weekly (starred review)

"With this life-affirming final act to the trilogy, Sebastian delivers a fiercely joyous tale of two people fighting to give each other a home and learning to love well."

"With the latest swoon-worthy addition to her Regency-set Seducing the Sedgwicks series, Sebastian once again brings exquisite depth and nuance to her characters while at the same time striking the perfect balance between sweet romantic yearning and bold sensuality."
— Booklist Online

On It Takes Two to Tumble: “The novel soars most in the moments where we see Phillip and Ben’s love propel them to find understanding with other members of their families... Sebastian’s latest checks all the boxes for a delightful winter read.” — Entertainment Weekly