The Bible With and Without Jesus: How Jews and Christians Read the Same Stories Differently (Paperback) 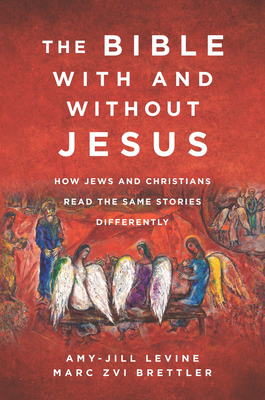 The Bible With and Without Jesus: How Jews and Christians Read the Same Stories Differently (Paperback)

The editors of The Jewish Annotated New Testament show how and why Jews and Christians read many of the same Biblical texts – including passages from the Pentateuch, the Prophets, and the Psalms – differently. Exploring and explaining these diverse perspectives, they reveal more clearly Scripture’s beauty and power.
Esteemed Bible scholars and teachers Amy-Jill Levine and Marc Z. Brettler take readers on a guided tour of the most popular Hebrew Bible passages quoted in the New Testament to show what the texts meant in their original contexts and then how Jews and Christians, over time, understood those same texts. Passages include the creation of the world, the role of Adam and Eve, the Suffering Servant of Isiah, the book of Jonah, and Psalm 22, whose words, “My God, my God, why have you forsaken me,” Jesus quotes as he dies on the cross.

Comparing various interpretations – historical, literary, and theological - of each ancient text, Levine and Brettler offer deeper understandings of the original narratives and their many afterlives. They show how the text speaks to different generations under changed circumstances, and so illuminate the Bible’s ongoing significance. By understanding the depth and variety by which these passages have been, and can be, understood, The Bible With and Without Jesus does more than enhance our religious understandings, it helps us to see the Bible as a source of inspiration for any and all readers.

MARC ZVI BRETTLER is the Bernice and Morton Lerner Distinguished Professor of Jewish Studies in the Department of Religious Studies at Duke University.  He has also taught at Brandeis University, Yale University, Brown University, Wellesley College, and Middlebury College. He is the author of many books, including How to Read the Bible and The Creation of History in Ancient Israel, and is the co-editor of the Jewish Annotated New Testament.

"In an age where polemics and talking past one another is common, the appeal to respectful interpretation and dialogue is refreshing and helpful. Perhaps it is not too much to expect that we see ourselves as others see us or see our sacred texts as others see them.  Highly recommended." — Dr. Ben Witherington, III, Amos Professor of NT for Doctoral Studies, Asbury Theological Seminary

“This exploration invites both Jews and Christians to look at texts whose meanings we take for granted and see them from the other side. It is a delightful read through a mind-opening adventure that will do more for Jewish-Christian relations than many official documents." — Carolyn Osiek, author of A Woman's Place: House Churches in Earliest Christianity

“Imbued with the best of modern biblical scholarship, which particularly shines in the moving treatment of the Sermon on the Mount, and written clearly and beautifully, this accessible study is highly recommended for all students of the Bible.” — Mark S. Smith, author of The Early History of God

“A must read for all concerned with peace and well-being in our civil societies in their rich diversity.” — Kathy Ehrensperger, Executive Editor of The Encyclopedia of Jewish-Christian Relations

“A book like this has been greatly needed. It should get wide use.” — Tony Campolo, author of Red Letter Christianity

“A real gem of a book and badly needed. Scholars of the highest caliber, they lay out the logic and consistency of each religious interpretation, thus nurturing mutual, informed respect and dialogue. Highly recommended.” — Steve McKenzie, Professor of Religious Studies, Rhodes College

“Jews and Christians read the Bible with different histories, interpretations, contexts, and emphases. How can the two understand each other better? No two persons are better suited to answer this question than Brettler and Levine. It requires expertise in the Bible itself and in the history of interpretation. These two respected scholars bring that dual expertise with style, clarity, wit, and visible honesty. They replace ignorance with mutual respect, and replace polemics with possibilities. Truly a book for everyone.” — Richard Elliott Friedman, author of The Exodus and Who Wrote the Bible?

"How can Jews and Christians read the Scriptures they share without denigrating each other’s interpretations? This book is an extraordinary effort to guide us through our readings of the Bible while respecting the differences of our traditions. The world has been waiting two thousand years for this book!"   — Susannah Heschel, Eli M. Black Distinguished Professor, Dartmouth College

“Fascinating . . . The chapter on the original meanings of sections of the Sermon on the Mount is alone worth the price of admission. A rich and important offering.” — Publishers Weekly (starred review)

“Tackles the worthy yet weighty task of examining the Jewish scriptures through both Jewish and Christian eyes, seeking to promote further understanding between adherents . . . A thorough, readable addition to the consistently fecund Jewish-Christian conversation.” — Kirkus

“This new project…[looks] at the various reinterpretations of the text in the first centuries BCE and CE, how they diverged according to Christian and Jewish belief, and the subtle and not-so-subtle polemics that were then developed…effectively showing how the separate interpretations may never converge, but the integrity of each can be appreciated.” — Library Journal

“Incisive and accessible in content and welcoming in tone, the book express very well a point I sought to convey throughout my career: ‘The more one knows of Israel’s scripture, the more meaningful the New Testament becomes.’” — Christian Century

"Seeks to offer insight into how two faiths can have such disparate understandings of the same text [and] can help Jews and Christians understand each other better." — The Times of Israel

“The authors seek to open a dialogue that will allow everyone to have a better understanding of the text. [The book is] easy to read, perfect for Jewish-Christian dialogue groups, and will appeal to anyone interested in understanding the Bible.” — The Reporter