Matthew Espinosa: More Than Me (Hardcover) 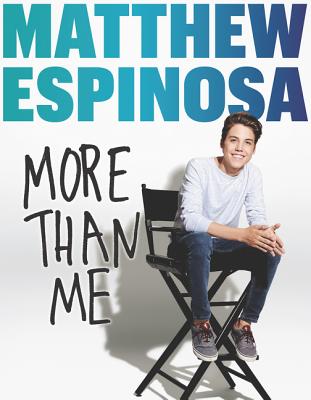 Matthew Espinosa: More Than Me (Hardcover)

You may think you know everything about multiplatform entertainer Matthew Espinosa—but he’s here to tell you so much more in his debut book, full of hundreds of brand-new pictures from a series of exclusive photo shoots.

You know Matthew is burning up the internet with more than 18 million fans across YouTube, Vine, Instagram, Twitter, and Facebook. You know about his starring role in the hit movie Be Somebody. And you know he makes you laugh every time.

More Than Me tells you what you don’t know, with tons of photos, Q&As, and more that offer an inside look at Matthew’s life and a new side of him that’s hilarious and heartfelt.

For the first time, Matthew wants to let the world in on the true story of his wild ride to success and why he loves what he does. In this must-have for any fan, Matthew is ready to share how legendary you can all be—together.

More Than Me cover photo by Chris Eckert.

Ever since he was a kid, Matthew Espinosa was looking for a spotlight where he could perform and show everyone who he was. He cultivated a deep love for acting, creating, and humor and finally discovered Vine as a way to share himself with the world.

More than one billion loops and more than fifty-five million YouTube views later, Matthew has become a global phenomenon. After wrapping a hugely successful national headlining tour in 2015, Matthew continued his meteoric rise to fame by starring in Be Somebody, his first feature-length film, distributed by Paramount Pictures in 2016.

And this is only the beginning.

More Than Me is Matthew’s debut book. You can visit him online at www.thematthewespinosa.com.