A Thousand Sisters: The Heroic Airwomen of the Soviet Union in World War II (Hardcover) 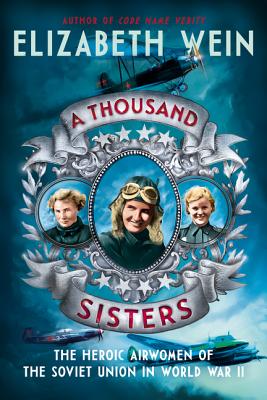 A Thousand Sisters: The Heroic Airwomen of the Soviet Union in World War II (Hardcover)

The gripping true story of the only women to fly in combat in World War II—from Elizabeth Wein, award-winning author of Code Name Verity

In the early years of World War II, Josef Stalin issued an order that made the Soviet Union the first country in the world to allow female pilots to fly in combat. Led by Marina Raskova, these three regiments, including the 588th Night Bomber Regiment—nicknamed the “night witches”—faced intense pressure and obstacles both in the sky and on the ground. Some of these young women perished in flames. Many of them were in their teens when they went to war.

This is the story of Raskova’s three regiments, women who enlisted and were deployed on the front lines of battle as navigators, pilots, and mechanics. It is the story of a thousand young women who wanted to take flight to defend their country, and the woman who brought them together in the sky.

Packed with black-and-white photographs, fascinating sidebars, and thoroughly researched details, A Thousand Sisters is the inspiring true story of a group of women who set out to change the world, and the sisterhood they formed even amid the destruction of war.

Elizabeth Wein is the holder of a private pilot’s license and the owner of about a thousand maps. She is best known for her historical fiction about young women flying in World War II, including the New York Times bestselling Code Name Verity and Rose under Fire. Elizabeth is also the author of Cobalt Squadron, a middle grade novel set in the Star Wars universe and connected to the 2017 release The Last Jedi. Elizabeth lives in Scotland and holds both British and American citizenship. Visit her online at www.elizabethwein.com.

“A masterful writer of fiction turns her powers to nonfiction (that alone is cause for celebration) to tell us an action-packed World War II story, full of thrills and tragedy, over-the-top heroism and tiny details that make her scenes and people come to life.” — Steve Sheinkin, author of Bomb and Undefeated

“What a writer! And an historian, too! Told through the superbly researched, powerful and poignant stories of the women involved, Elizabeth Wein gives due to the Soviet Union’s valiant women flyers of World War II.” — Candace Fleming, award-winning author of The Family Romanov

“A powerful tale…. This story proves what every child should know: A woman can do anything.” — New York Times Book Review

“Wein relates episodes of daring, heroism, and tragedy that fully match male-centric war stories but also acknowledges that there were gender-related tensions to be overcome regarding competitive flyboys and skeptical commanders.” — Bulletin of the Center for Children’s Books

“Exceptionally well researched …  [and] packed with lively detail.” — ALA Booklist

“[An] affecting introduction to these courageous, determined pilots, mechanics, and navigators.” — Publishers Weekly

“An easy, friendly writing style — deceptive, given the acuity of Wein’s perceptions and the extent of the material she manages — invites readers into the company of a formidable sisterhood.” — Horn Book Magazine