The Complete Beatles Songs: The Stories Behind Every Track Written by the Fab Four (Hardcover) 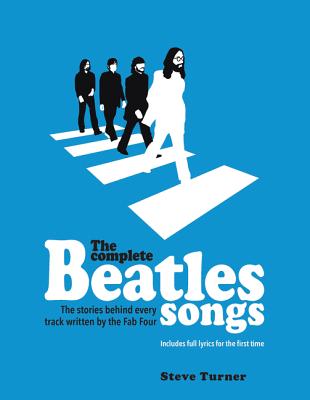 The Complete Beatles Songs: The Stories Behind Every Track Written by the Fab Four (Hardcover)

A lavishly illustrated, rollicking account of the real people and events that inspired the Beatles' songs, now fully updated and revised by renowned Beatles expert and music journalist Steve Turner—the definitive analysis of the music and influences of the world's most successful and popular rock-and-roll band and the only volume that contains a complete set of printed lyrics to all of the Beatles' songs.

Was there really an Eleanor Rigby?

What inspired "Happiness is a Warm Gun"?

Why was Paul the "walrus"?

What inspired the lyrics to Ringo's "Octopus's Garden"?

Arranged chronologically by album, The Complete Beatles Songs examines the inspiration behind the group's writing and discusses every song created by John Lennon, Paul McCartney, George Harrison, and Ringo Starr. Steve Turner shatters well-worn myths and adds a new dimension to the Fab Four's rich legacy by investigating events immortalized in The Beatles' music, which has influenced numerous contemporary artists and continues to endure in popular culture.

Fully revised and updated (originally published as A Hard Day’s Write), The Complete Beatles Songs is the only volume that contains a complete set of printed lyrics to all of the Beatles' songs, used with exclusive permission from the band's music publisher SonyATV. It also includes new information on many songs, plus brand-new stories and revelations, as well as 200 black-and-white and color photographs-many exclusive to the book. The result is a unique, authoritative, and compelling masterpiece that chronicles the untold story of the Beatles themselves, for faithful fans and new generations discovering their music for the first time.

Steve Turner is the author of Trouble Man: The Life and Death of Marvin Gaye, A Hard Day's Write: The Stories Behind Every Beatles' Song, Hungry for Heaven: Rock and Roll and the Search for Redemption, Jack Kerouac: Angelheaded Hipster, and Van Morrison: Too Late to Stop Now. His articles have appeared in Rolling Stone, Mojo, Q, and the London Times. He lives in London with his wife and two children.