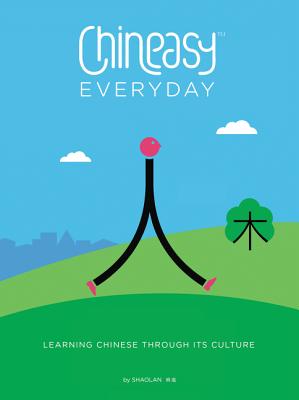 A unique and highly entertaining introduction to the richness of Chinese language, culture, and civilization, built on the groundbreaking and hugely popular Chineasy visual learning method.

To educate the world about the richness and character of China’s people, customs, and heritage, entrepreneur ShaoLan Hsueh created Chineasy, a special building-block learning method that uses highly recognizable and appealing illustrations. She introduced her revolutionary teaching methodology and graphic language in her bestseller, Chineasy.

In this standalone guide, she expands her scope to include all facets of Chinese life and culture, including Numbers, Time & Dates, The Solar System & the Five Elements, People, Nature, Animals, How to Describe Things, Health & Well-being, Travel, City & Country, Shopping, Food & Drink, and Internet & Technology. She begins all twelve sections with an overview of key Chineasy characters, then presents the specific symbols relevant to each—providing insight into how Chinese thinking has shaped its language and civilization in a way that anyone can understand and appreciate.

Whether you are a student learning Mandarin, an executive pursuing business ties to Chinese companies, or a curious tourist traveling to China, this single-volume encyclopedia will stimulate the mind, enchant the culturally minded and inspire everyone who seeks new experiences and a wider understanding of our world.

Born in Taipei, ShaoLan is an entrepreneur, traveler, and writer. She has written best-selling books on software, and her first internet venture became a major player in the Greater China area in the late 1990s. After moving to London to pursue studies at the University of Cambridge, in 2005 she founded Caravel Capital, which invests in young technology companies. ShaoLan is a member of the boards of the Saïd Business School of Oxford University, the Victoria and Albert Museum, Asia House, and the New School Network (an organization backed by the British Government promoting educational reform). She is also the author of Chineasy.