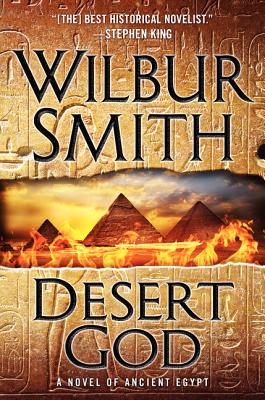 This is book number 5 in the The Egyptian Series series.

New York Times bestselling author Wilbur Smith—hailed by Stephen King as the “best historical novelist” and one of the world’s biggest-selling authors—returns to Ancient Egypt in this breathtaking epic that conjures the magic, mystery, romance, and bloody intrigue of a fascinating lost world.

Game of Thrones meets Ancient Egypt in this magnificent, action-packed epic. On the gleaming banks of the Nile, the brilliant Taita—slave and advisor to the Pharaoh—finds himself at the center of a vortex of passion, intrigue, and danger. His quest to destroy the Hyksos army and form an alliance with Crete takes him on an epic journey up the Nile, through Arabia and the magical city of Babylon, and across the open seas. With the future of Egypt itself on his shoulders, Taita enters a world where the line between loyalty and betrayal shifts like the desert sands, evil enemies await in the shadows, and death lingers on the edges of darkness.

Described by Stephen King as “the best historical novelist,” WILBUR SMITH made his debut in 1964 with When the Lion Feeds and has since sold more than 125 million copies of his books worldwide and been translated into twenty-six different languages. Born in Central Africa in 1933, he now lives in London.

Praise for Wilbur Smith: “One of the world’s most popular adventure writers.” — Washington Post Book World

“Wilbur Smith is one of those benchmarks against whom others are compared.” — The Times (London)

“Best Historical Novelist--I say Wilbur Smith...You can get lost in Wilbur Smith and misplace all of August.” — Stephen King

“A rich, compelling look back in time [to] when history and myth intermingled.” — San Francisco Chronicle on River God

“This old-fashioned adventure novel keeps the reader enthralled all the way to its very exciting conclusion.” — Washington Post Book World on The Seventh Scroll

“Here is a story as mgical as it is enlightening--not just about history, but about the heart of a heroic man.” — James Rollins, New York Times bestselling author of The 6th Extinction

“Smith is a masterful storyteller, carefully blending intrigue, action, and suspense on a solid foundation of history...Add pirates, chariot racing, and large-scale natural disasters, and the result is a graphic, gory, and exciting tale of ancient conflict and intrigue.” — Publishers Weekly

“What’s the recipe for commercial fiction success? Start with solid history along with plenty of action, sex, and brutal violence...Smith’s fans in general and fans of Taita from the Egyptian series will be pleased.” — Library Journal