Frozen in Time: An Epic Story of Survival and a Modern Quest for Lost Heroes of World War II (Large Print / Paperback) 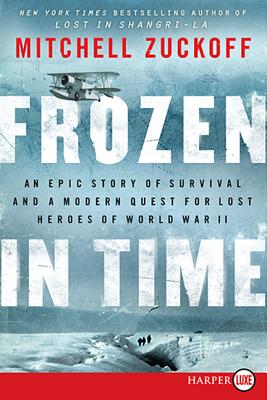 Frozen in Time: An Epic Story of Survival and a Modern Quest for Lost Heroes of World War II (Large Print / Paperback)

“This non-fiction story is more riveting, captivating, and exciting than any fiction author can write. In search of a lost cargo plane on the ice cap of Greenland, a B17 crashes with 9 people aboard. In a second rescue mission a Grumman Duck (an amphibious plane) disappears in the milky sky of Greenland. Zuckoff gives us a harrowing and nailbiting WW II story of hope, despair, perseverance, heroism, and survival and a contemporary account of how some volunteers are trying to recover the Grumman Duck and to bring home the remains of it's crew. You'd better get 'Lost in Shangri La' then 'Frozen in Time (in Greenland.' Great 5 star book.”
— Jean-Paul Adriaansen, Water Street Books, Exeter, NH

Frozen in Time is a gripping true story of survival, bravery, and honor in the vast Arctic wilderness during World War II, from the author of New York Times bestseller Lost in Shangri-La.

On November 5, 1942, a US cargo plane slammed into the Greenland Ice Cap. Four days later, the B-17 assigned to the search-and-rescue mission became lost in a blinding storm and also crashed. Miraculously, all nine men on board survived, and the US military launched a daring rescue operation. But after picking up one man, the Grumman Duck amphibious plane flew into a severe storm and vanished.

Frozen in Time tells the story of these crashes and the fate of the survivors, bringing vividly to life their battle to endure 148 days of the brutal Arctic winter, until an expedition headed by famed Arctic explorer Bernt Balchen brought them to safety. Mitchell Zuckoff takes the reader deep into the most hostile environment on earth, through hurricane-force winds, vicious blizzards, and subzero temperatures.

Moving forward to today, he recounts the efforts of the Coast Guard and North South Polar Inc. – led by indefatigable dreamer Lou Sapienza – who worked for years to solve the mystery of the Duck’s last flight and recover the remains of its crew.

A breathtaking blend of mystery and adventure Mitchell Zuckoff's Frozen in Time: An Epic Story of Survival and a Modern Quest for Lost Heroes of World War II is also a poignant reminder of the sacrifices of our military personnel and a tribute to the everyday heroism of the US Coast Guard.

Mitchell Zuckoff is the Sumner M. Redstone Professor of Narrative Studies at Boston University. He covered 9/11 for the Boston Globe and wrote the lead news story on the day of the attacks. Zuckoff is the author of seven previous works of nonfiction, including the number one New York Times bestseller 13 Hours: The Inside Account of What Really Happened in Benghazi, which became the basis of the Paramount Pictures movie of the same name. His earlier books also include the New York Times bestsellers Lost in Shangri-La and Frozen in Time. As a member of the Boston Globe Spotlight Team, he was a finalist for the Pulitzer Prize in investigative reporting and the winner of numerous national awards. He lives outside Boston.

“The events Mr. Zuckoff relates are terrifying, horrible, remarkable and, sometimes, thrilling. … He is a skilled writer, reporter and researcher, but what gives his latest book its power is his poignant, persuasive depiction of men under arms.” — Howard Schneider, Wall Street Journal

“This is not a genre known for literary style, but Zuckoff’s clear-eyed prose does just what it needs to do…. He even manages to add a contemporary story…and stitch it into the historical narrative so deftly that one feeds the other.” — Washington Post

“Frozen in Time makes WWII history seem fresh…. [I]t’s non-fiction that reads like a page-turner of a mystery. It’s filled with heroism, tragedy and remarkable persistence, in the past and present. It’s a descriptive slice of World War II…. Zuckoff is a good writer and rigorous researcher. In a dramatic story that easily could be hyped, he writes that ‘no liberties were taken with facts, dialogue, characters, or chronology’.” — USA Today

“Mitchell Zuckoff has a nose for the classic adventure story…. As he details the bomber crew’s odyssey…weeks stretch into months, but the pages fly by as you eagerly read on. Will they ever get home safely? Zuckoff’s mastery keeps readers wondering all the way to the end.” — Boston Globe

“The gripping story of a WWII-era plane crash, the survivors who braved subzero conditions, and the modern-day quest for answers.” — People

“A true-life nail-biter—as nimbly paced as a novel. Grade: A.” — Entertainment Weekly

“Once again, Mitchell Zuckoff has uncovered a thrilling historical tale and told it masterfully. Seamlessly interweaving the past and the present, Frozen in Time is one of those epic adventure stories that will hold you in its grip from beginning to end.” — David Grann, author of The Lost City of Z

“If Lost in Shangri-La was a prize-winning page-turner, Frozen in Time is even more enthralling… a must-read.” — Austin American-Statesman

“Mitchell Zuckoff has done it again—he’s found another amazing World War II story that everyone else somehow missed. Much like his acclaimed Lost in Shangri-La, this is a story about brave aviators fighting for their lives in a back-theater of the war. Only this time Zuckoff isn’t just chronicling the adventure—he’s part of it. Frozen in Time is a beautifully-written war yarn, but at its heart, it’s a non-fiction mystery—the tale of a group of heroes united in a desire to solve a riddle buried in the Arctic ice.” — Hampton Sides, author of Ghost Soldiers and Hellhound on His Trail

“Zuckoff’s gripping narrative unfolds with immediacy and verve as men in fetid snow caves and sputtering aircraft pit their dogged camaraderie and desperate, white-knuckle improvisations against the fury of an Arctic winter.” — Publishers Weekly(starred review)

“This tale of true heroism, human ingenuity, and sacrifice by ordinary people in the face of a bitter enemy is for anyone interested not only in World War II aviation or modern scientific techniques for locating missing aircraft, but in popular histories of real adventure.” — Library Journal (starred review)

“You would think that all the World War II stories have been told by now. But Mitchell Zuckoff has a remarkable knack for finding new ones, and he has done it again, with a gripping, moving tale, suspensefully told—whose final act takes place today.” — Adam Hochschild, author of To End All Wars: A Story of Loyalty and Rebellion, 1914-1918

“Fierce. . . . A harrowing tale of survival in Greenland during World War II. . . .The detailed reporting culminates in an intense account of survival under such intolerable conditions. Rising from a hypothermic stupor to stumble out into vicious winds to retrieve supplies becomes a heroic act. The pages of Frozen in Time are crowded with such heroes — as well as those not just willing, but eager, to put their lives on the line to save them.” — Daily News

“When it comes to riveting nonfiction, author Mitchell Zuckoff has a knack for finding fascinating but forgotten stories from World War II…. This is a truly suspenseful and thrilling American story of perseverance with a worthwhile payoff in the final pages.… [A] must-read.” — CNN Online

“First-rate.… His dual narrative is a welcome change of pace from so many other World War II books. It is well-researched and superbly written.” — Steve Weinberg, Dallas Morning News