Desilu: The Story of Lucille Ball and Desi Arnaz (Paperback) 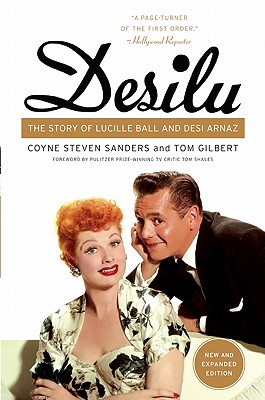 The behind-the-scenes story of television’s happiest couple, and Hollywood’s most tumultuous marriage

The magical union of Lucille Ball and Desi Arnaz created I Love Lucy—the greatest, most enduring situation comedy in television history. Yet the overwhelming pressures of fame, backstage battles, oversized egos, and Desi’s philandering and drinking led to the destruction of their star-crossed, tempestuous marriage—but never their love for each other.

This new edition of Desilu features a special commentary by Pulitzer Prize-winning TV critic Tom Shales, and includes a brand-new preface and never-before-seen photographs. Written with the close cooperation of family members, including Lucy and Desi’s daughter, Lucie Arnaz, Desilu is the most candid and balanced inside account of Lucy and Desi’s celebrated, but ultimately tragic, relationship—as well as a fascinating look at the legendary Desilu Studios and the fabled golden age of television.

Coyne Steven Sanders is a noted entertainment journalist, author of the critically acclaimed Rainbow's End: The Judy Garland Show and The Dick Van Dyke Show Book, and writes for Variety in Los Angeles.

Tom Gilbert, a veteran entertainment trade journalist, has written about television for the Los Angeles Times, Variety, and the Hollywood Reporter. In his capacity as a Lucy expert, he has appeared on E!, CNN, the History Channel, Entertainment Tonight, A&E's Biography, NBC's Headliners and Legends, and the Fox News Channel. Based in Los Angeles, he currently is managing editor of the television trade journal Electronic Media.

“A page-turner of the first order ... Desilu is good, gritty, fair but strong and bottom line -- a gripper.” — The Hollwood Reporter

“Lively and informative ... A thoughtful, candid look at one of the world’s most loved, most watched comedy teams -- — The Houston Post