The Present Age: On the Death of Rebellion (Harper Perennial Modern Thought) (Paperback) 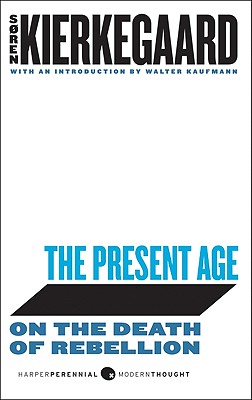 The Present Age: On the Death of Rebellion (Harper Perennial Modern Thought) (Paperback)

“By far the most profound thinker of the 19th century.”
— Ludwig Wittgenstein

The Present Age is the stunningly prescient essay on the rise of mass media—particularly advertising, marketing, and publicity—by the great philosopher Søren Kierkegaard, the “father of existentialism.” With an introduction from celebrated philosopher Walter Kaufmann—who  states “those who would know Kierkegaard can do no better than to begin with this book”—The Present Age is an ideal introduction to one of the greatest thinkers in the history of western philosophy.

Søren Kierkegaard (1813–1855) lived in Copenhagen, Denmark. His books include Works of Love and Spiritual Writings (translated and edited by George Pattison).


“Those who would know Kierkegaard can do no better than to begin with this book.... In The Present Age we find the heart of Kierkagaard.”
— Walter Kaufman, from the "Introduction"

“The Present Age shows just how original Kierkegaard was. He brilliantly foresaw the dangers of the lack of commitment and responsiblity in the Public Sphere. When everything is up for endless detached critical comment as on blogs and cable news, action finally becomes impossible.”
— Hubert L. Dreyfus, University of California, Berkeley