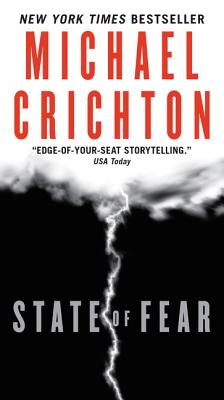 In Tokyo, in Los Angeles, in Antarctica, in the Solomon Islands . . . an intelligence agent races to put all the pieces together to prevent a global catastrophe.

Michael Crichton (1942-2008) was the author of the bestselling novels The Terminal Man, The Great Train Robbery, Jurassic Park, Sphere, Disclosure, Prey, State of Fear, Next and Dragon Teeth, among many others. His books have sold more than 200 million copies worldwide, have been translated into forty languages, and have provided the basis for fifteen feature films. He wrote and directed Westworld, The Great Train Robbery, Runaway, Looker, Coma and created the hit television series ER. Crichton remains the only writer to have a number one book, movie, and TV show in the same year.

Daniel H. Wilson is a Cherokee citizen and author of the New York Times bestselling Robopocalypse and its sequel Robogenesis, as well as ten other books. He recently wrote the Earth 2: Society comic book series for DC Comics. Wilson earned a PhD in Robotics from Carnegie Mellon University, as well as master’s degrees in Artificial Intelligence and Robotics. He has published over a dozen scientific papers and holds four patents. Wilson lives in Portland, Oregon.

“In STATE OF FEAR, Michael Crichton delivers a lightning-paced technopolitical thriller...every bit as informative as it is entertaining.” — Wall Street Journal

“Fascinating for how Crichton was trying to make the very absence of fear spooky.” — San Francisco Chronicle

“There’s no one else like him…a fast, fun read.” — Weekly Standard

“This is definitely one for the Christmas list.” — National Review

“STATE OF FEAR is a valuable education in the guise of entertainment. Do yourself a favor and buy it.” — Pittsburgh Post-Gazette

“The thrills of Crichton’s latest are interspersed with fascinating facts and data. Perhaps his most serious and important book yet.” — Booklist

“…this proves a pleasant way of learning a lot worth knowing.” — Philadelphia Inquirer

“…he understands science and how to separate fact from fiction. Impressive documentation.” — Washington Times

“Crichton has written a book that deserves to be taken seriously.” — The New Yorker

“The king of the techno-thriller has once again given us a gripping, action-packed yarn.” — Birmingham Post

“Crichton knows how to craft a tale, one that keeps the reader turning the pages.” — Houston Chronicle

“You have to hand it to Michael Crichton; he knows how to tell a story.” — Wisconsin State Journal

“STATE OF FEAR is an exciting yarn.” — The Liverpool Daily Post

“In STATE OF FEAR Crichton weaves a stunning fiction around the issue of global warming.” — Australia Gold Coast Bulletin

“STATE OF FEAR grabs you from the start.” — The Weekend Australian

“STATE OF FEAR is the world’s first page-turner that people will want to read in one gulp.” — Montery County Herald

“A gripping techno thriller that…spares no expense when it comes to adventure, suspense and, ultimately, satisfaction.” — Pittsburgh Post-Gazette

“One of the real pleasures of Crichton’s books is their erudite polish.” — Slate

“For thriller fans, STATE OF FEAR is the perfect tonic for a weekend when you’re snowbound.” — The Ottowa Sun

“Fast-faced and a fun read. A breath of fresh air.” — The Vancouver Province

“A master. A connoisseur of catastrophe.” — Los Angeles Times

“An exciting story…in the hands of a master story-teller like Crichton, it’s good entertainment.” — Sunday Telegraph

…Plenty of thrills, chills and spills. STATE OF FEAR is required reading.” — The Electricity Daily