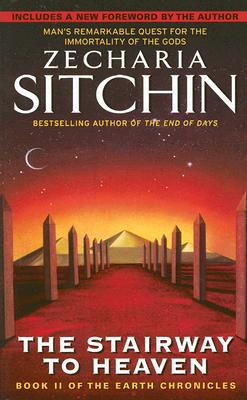 This is book number 2 in the Earth Chronicles series.

A classic of ancient human history—and one of the inspirations behind the History Channel’s Ancient Aliens—Zecharia Sitchin’s Earth Chronicles series is the revelatory and deeply provocative masterwork that forever altered humankind’s view of our history and our destiny.

Since earliest times, human beings have pondered the incomprehensible questions of the universe, life . . . and the afterlife. Where did mortal man go to join the immortal Gods? Was the immense and complex structure at Giza an Egyptian Pharaoh's portal to immortality? Or a pulsating beacon built by extraterrestrials for landing on Earth?

In this second volume of his trailblazing series The Earth Chronicles, Zecharia Sitchin unveils secrets of the pyramids and hidden clues from ancient times to reveal a grand forgery on which established Egyptology is founded, and takes the reader to the Spaceport and Landing Place of the Anunnaki gods—"Those Who from Heaven to Earth Came."

Zecharia Sitchin is an internationally acclaimed author and researcher whose books offer evidence that we are not alone in our own solar system. One of a handful of scholars able to read the Sumerian cuneiform tablets, he has combined archaeology, ancient texts, and the Bible with the latest scientific discoveries to retell the history and prehistory of mankind and planet Earth. His trailblazing books have been translated into more than twenty languages; his first one, an oft-quoted classic, celebrates the thirtieth anniversary of its publication. A graduate of the University of London and a journalist and editor in Israel for many years, he now lives and writes in New York.

“Brilliant and explosive.” — Erich von Daniken, author of CHARIOTS OF THE GODS

“A dazzling performance...Sitchin is a zealous investigator.” — Kirkus Reviews

“An intriguing book--read it...Sitchin is to be congratulated...He makes his point, and makes it well.” — The British UFO Research Organization