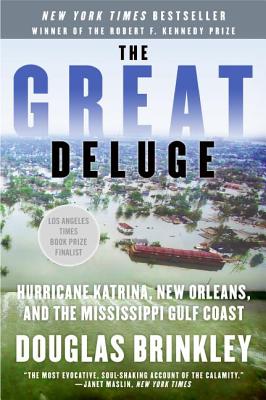 In the span of five violent hours on August 29, 2005, Hurricane Katrina destroyed major Gulf Coast cities and flattened 150 miles of coastline. But it was only the first stage of a shocking triple tragedy. On the heels of one of the three strongest hurricanes ever to make landfall in the United States came the storm-surge flooding, which submerged a half-million homes—followed by the human tragedy of government mismanagement, which proved as cruel as the natural disaster itself.

In The Great Deluge, bestselling author Douglas Brinkley finds the true heroes of this unparalleled catastrophe, and lets the survivors tell their own stories, masterly allowing them to record the nightmare that was Katrina.

Douglas Brinkley is the Katherine Tsanoff Brown Chair in Humanities and Professor of History at Rice University, presidential historian for the New-York Historical Society, trustee of the Franklin D. Roosevelt Presidential Library, and a contributing editor at Vanity Fair. The Chicago Tribune dubbed him “America’s New Past Master.” He is the recipient of such distinguished environmental leadership prizes as the Frances K. Hutchison Medal (Garden Club of America), Robin W. Winks Award for Enhancing Public Understanding of National Parks (National Parks Conservation Association), and the U.S. Fish and Wildlife Service’s Lifetime Heritage Award. His book The Great Deluge: Hurricane Katrina, New Orleans, and the Mississippi Gulf Coast received the Robert F. Kennedy Book Award. He was awarded a Grammy for Presidential Suite and is the recipient of seven honorary doctorates in American studies. His two-volume, annotated Nixon Tapes recently won the Arthur S. Link–Warren F. Kuehl Prize. He lives in Austin, Texas, with his wife and three children.

“‘The Great Deluge,’ captures the human toll of Katrina as graphically as the most vivid newspaper and television accounts” — New York Times Book Review

“The first historical book that has researched the available record on Katrina and is the closest to actual fact.” — Gov. Kathleen Blanco

“More dispassionate and analytical books will be written about Katrina, few will capture the human drama as well as Brinkley’s.” — Financial Times

“An important, poignant and often-infuriating look at the tragedy.” — Denver Post

“Written with verve and energy, this is Brinkley’s best book to date.” — Times Picayune

“…likely to be the [account] against which other treatments of the subject will be judged.” — Washington Times

“An impassioned argument for sustained national interest in the aftermath of a catastrophe.” — The Advocate

“…likely to be the [account] against which other treatments of the subject will be judged.” — Daily Advertiser

“You can call “The Great Deluge” history, or you can call it journalism. But it’s good stuff” — St. Louis Post-Dispatch

“If you’ve grown numb to the horror of Katrina, this will wake you up. It’s a stirring and important book.” — The Arizona Republic