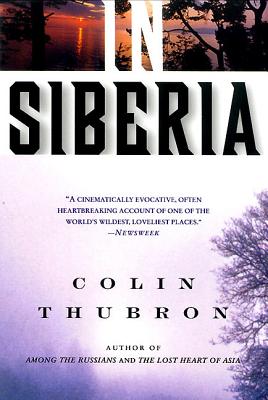 As mysterious as its beautiful, as forbidding as it is populated with warm-hearted people, Syberia is a land few Westerners know, and even fewer will ever visit. Traveling alone, by train, boat, car, and on foot, Colin Thubron traversed this vast territory, talking to everyone he encountered about the state of the beauty, whose natural resources have been savagely exploited for decades; a terrain tainted by nuclear waste but filled with citizens who both welcomed him and fed him—despite their own tragic poverty. From Mongoloia to the Artic Circle, from Rasputin's village in the west through tundra, taiga, mountains, lakes, rivers, and finally to a derelict Jewish community in the country's far eastern reaches, Colin Thubron penetrates a little-understood part of the world in a way that no writer ever has.

Colin Thubron is an acclaimed travel writer and novelist. His first books were about the Middle East – Damascus, Lebanon and Cyprus. In 1982 he travelled by car into the Soviet Union, a journey he described in Among the Russians. From these early experiences developed his classic travel books: Behind the Wall: A Journey through China (winner of the Hawthornden Prize and the Thomas Cook Travel Award), The Lost Heart of Asia, In Siberia (Prix Bouvier), Shadow of the Silk Road and To a Mountain in Tibet.