Reinventing Comics: The Evolution of an Art Form (Paperback) 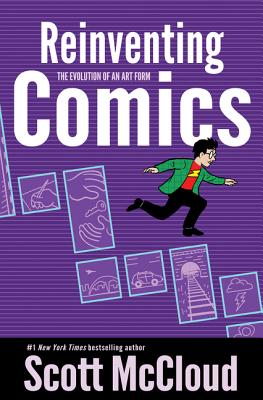 Reinventing Comics: The Evolution of an Art Form (Paperback)

The new century manifesto on the many futures of comics art

In 1993, Scott McCloud tore down the wall between high and low culture with the acclaimed international hit Understanding Comics, a massive comic book that explored the inner workings of the worlds most misunderstood art form. Now, McCloud takes comics to the next level, charting twelve different revolutions in how comics are created, read, and perceived today.

Part One of this fascinating and in-depth book includes:

Then in Part Two, McCloud paints a breathtaking picture of comics' digital revolutions, including:

Scott McCloud has been writing, drawing, and examining comics since 1984. Winner of the Eisner and Harvey awards, his works have been translated into more than sixteen languages. Frank Miller (Sin City, 300) called him "just about the smartest guy in comics." He lives with his family in southern California. His online comics and inventions can be found at scottmccloud.com.

’Scott McCloud’s Reinventing Comics is a manifesto, and an audacious one, irritating as the grain of sand which may one day produce a pearl. It will provoke a lot of arguments, it will make a lot of people think, and it may ultimately change the world a little—which is, after all, what a manifesto is for.” — Neil Gaiman

“Scott McCloud has got to be just about the smartest guy in comics. Once again, he’s opened the floor to a debate that will no doubt go on for years—this time, with not just the definition of comics, but its very fate at stake.” — Frank Miller

“Anyone involved in interactive entertainment (games, web, etc.) should read this book. Scott McCloud has once again transcended the world of comics and tapped into much deeper issues of creativity entertainment and economics. This time he’s looking into the future rather than the past.” — Will Wright

“It may just be the blueprint for the very future of the comics industry.” — Library Journal