Don't Pee on My Leg and Tell Me It's Raining: America's Toughest Family Court Judge Speaks Out (Paperback) 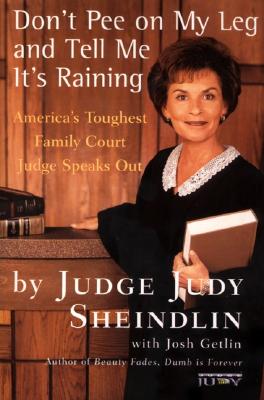 Don't Pee on My Leg and Tell Me It's Raining: America's Toughest Family Court Judge Speaks Out (Paperback)

¡n we get some reality in here?ߡsks Judy Sheindlin, former supervising judge for Manhattan Family Court. For twenty–four years she has laid down the law as she understands it:

● If you have children, you'd better support them.

Now she abandons all judicial restraint in a scathing critique of the system – filled with realistic hard–nosed alternatives to our bloated welfare bureaucracy and our soft–on–crime laws.

Judge Judy Sheindlin established herself as a tough but fair judge in New York's family court. She is the presiding judge for Judge Judy, a nationally syndicated daily television show based on real court cases, and the author of two best-selling adult books and a children's book. She lives in New York City with her husband, Jerry, a New York Supreme Court Judge. She is the mother of five and a grandmother of four.