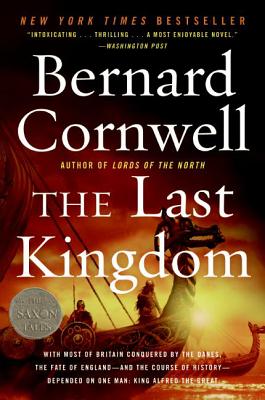 This is book number 1 in the Saxon Tales series.

The first installment of Bernard Cornwell’s New York Times bestselling series chronicling the epic saga of the making of England, “like Game of Thrones, but real” (The Observer, London)—the basis for The Last Kingdom, the hit Netflix series.

In the middle years of the ninth century, the fierce Danes stormed onto British soil, hungry for spoils and conquest. Kingdom after kingdom fell to the ruthless invaders until but one realm remained. And suddenly the fate of all England—and the course of history—depended upon one man, one king.

BERNARD CORNWELL is the author of over fifty novels, including the acclaimed New York Times bestselling Saxon Tales, which serve as the basis for the hit Netflix series The Last Kingdom. He lives with his wife on Cape Cod and in Charleston, South Carolina.

“Intoxicating….Thrilling….Cornwell conveys the disquiet of change and the melancholy of extinction as few historical novelists manage to.” — Washington Post Book World

“Enter Cornwell’s vividly drawn ninth-century Kingdom … after this dip into the Dark Ages, we want to go back.” — Entertainment Weekly

“Cornwell .... makes the usually gloomy ninth century sound like a hell of a lot of fun.” — Kirkus Reviews