The Hallowed Hunt: A Novel (Hardcover) 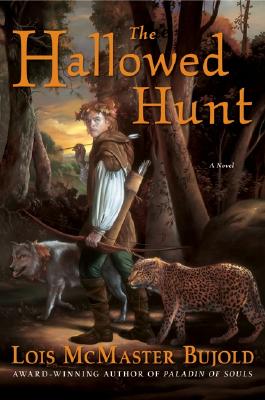 By Lois McMaster Bujold
$24.95
Email or call for price

An acclaimed legend in the field of fantasy and science fiction, Lois McMaster Bujold returns to the vivid and perilous world of her previous masterworks, the Hugo Award-winning Paladin of Souls and Hugo and World Fantasy Award-nominated The Curse of Chalion, with an epic tale of devotion and strange destiny.

Prince Boleso is dead -- slain by a noblewoman he had intended to defile.

Lord Ingrey kin Wolfcliff has been dispatched to the remote castle of the late, exiled, half-mad royal to transport the body to its burial place and the accused killer, the Lady Ijada, to judgment. Ingrey's mission is an ugly and delicate one, for the imminent death of the old Hallow King has placed the crown in play, and the murder of his youngest son threatens to further roil already treacherous political waters. But there is more here than a prince's degenerate lusts and the fatal retribution it engendered. Boleso's dark act, though unfinished, inadvertently bestowed an unwanted mystical "gift" upon proud, brave Ijada that must ultimately mean her doom -- a curse similar to one with which Ingrey himself has been burdened since boyhood.

A forbidden spirit now inhabits the soul of Ijada, giving her senses she never wished for and an obligation no one sane would desire. At once psychically linked to the remarkable lady and repelled by what she carries within, Ingrey fears the havoc his own inner beast could wreak while on their journey, as he fights a powerful growing attraction ... and an equally powerful compulsion to kill.

The road they travel together is beset with dangers -- and though duty-bound to deliver Ijada to an almost certain execution, Ingrey soon realizes that she is the only one he dares trust. For a malevolent enemy with designs on a troubled kingdom holds Ingrey in his sway -- and without Ijada's aid and love, the haunted lord will never be able to break free and realize the great and terrible destiny bestowed upon him by the gods, the damned, and the dead.

“An unusual kind of ghost story that transcends the usual intimate form by several degrees of magnitude.”
— Locus